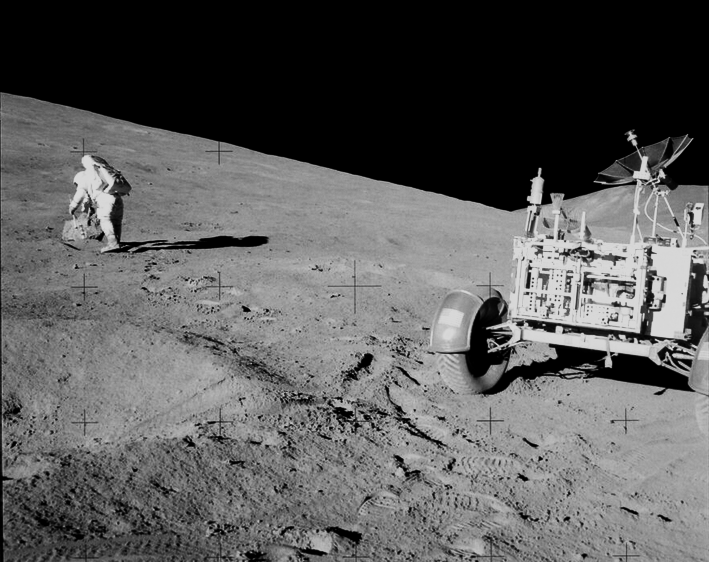 This article comes after that of May 2020, entitled: “The Apollo 18 Space Capsule Mission (1975)”.
We all remember the lunar exploration program carried out by NASA some 50 years ago, between 1969 and 1972. Six successful missions landed 12 men on the moon to then return them safely to Earth. At that time, this space conquest had been enthusiastically followed around the world. We also remember that this program was suddenly stopped in 1972 offocially for budget considerations.
But what we don’t know is that, another three Saturn V rockets were built and were launched into space a few years later.

The Apollo 18 flight is better known as ASTP (Apollo-Soyuz Test Project), because it was the first joint space mission between the Soviet Union and the United States, which was in the media at the time. On the same day (July 15, 1975), the Russians and the Americans launched the Soyuz spacecraft from the Baikonur site and the Apollo 18 capsule from Cape Kennedy. And on July 17, 1975, the two Earth-orbiting ships came together, allowing a symbolic handshake between a Russian cosmonaut and an American astronaut.

But what was not said is that this ASTP mission was in fact a preparatory project to share the knowledge necessary for the future moon landing projects, projects that remained secret. This cooperation between the two greatest powers of the time showed that despite the apparent political hostilities, they could work together on strictly scientific and peaceful activities.

In 2010, an Italian investigative journalist, Luca Scantamburlo, published a book called “Apollo 20 The disclosure” (1). According to this researcher, the Apollo 19 and 20 capsules were launched not by NASA but by the Department of Defense, i.e. the US Air Force, as part of secret agreements between the United States and the former Soviet Union. Beyond this collaboration – which was a first – the objective was to elucidate certain anomalies observed on the far side of the Moon.

According to the survey published in this book, Apollo 19 and Apollo 20 – operations under the joint leadership of the United States and the Soviet Union – were missions conducted by the US Air Force with the assistance of NASA and the Soviet collaboration. The Apollo 19 and Apollo 20 crews each included a Soviet cosmonaut and two American astronauts (a man and a woman). Each of these capsules was launched with a Saturn V rocket from the US Air Force base in Vandenberg, California.

Apollo 19, launched on 2 February, 1976, apparently suffered a technical problem (sudden loss of telemetry) caused by the collision in space with an unidentified object (was it a meteor) And was unable to reach its goal. Yet the crew were able to reach Earth. During his investigation Luca Scantamburlo was able to communicate with the Apollo 19 captain, but without the latter openly revealing his identity (this is understandable because the Apollo 19 mission was secret). However, based on a number of clues, the author of the investigation thinks he came to the conclusion that it was an astronaut who had already participated in two other missions in space. Apollo 19’s objective was the same as that to be assigned to Apollo 20 a few months later.

Apollo 20 landed on August 16, 1976 near the wreckage of a huge spacecraft on the far side of the moon. This object had been observed by the Apollo 15 and Apollo 17 crews and was visible in NASA photos. The Soviets also had knowledge of it. This wreck which is over 2.5 miles in length, was visited by the Apollo 20 crew and is believed to be very old.

Apollo 20 captain, William Rutledge, took the initiative to contact journalist Luca Scantamburlo, although he lived in Kigali (Ruanda) under a new identity. Thus, Luca Scantamburlo, journalist author of this investigation, has been in contact (via the Internet) with the captains of the Apollo 19 and Apollo 20 crews. According to him, and despite some inconsistencies, the probability is high that the revelations he made in his book relate to real facts.