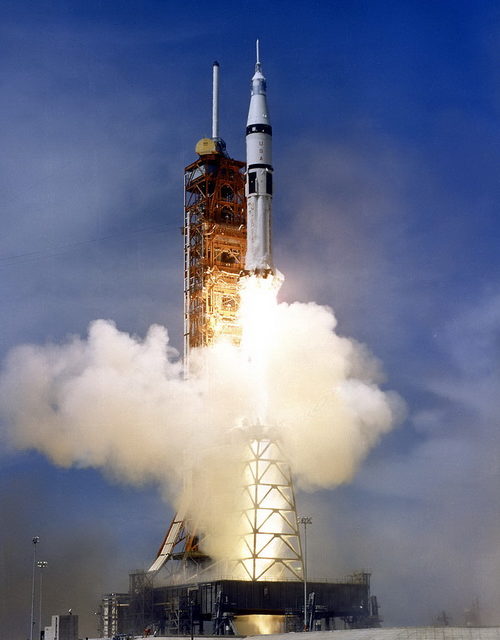 We remember that the lunar exploration program by NASA some fifty years ago, made it possible to send 12 men to the Moon and then bring them back safe and sound to Earth, thanks to six successful missions from 1969 to 1972. This conquest of space was followed with enthusiasm at the time, throughout the world. Then this program suddenly stopped, officially for budget reasons.

In fact, we know that 20 Apollo missions were scheduled from the start of this lunar exploration project, using the very powerful 3-stage Saturn V rocket. The first 10 missions were intended to validate the performance of this rocket, and it was with Apollo 11, in July 1969, that NASA, for the first time ever, could make two men walk on the Moon. The feat was repeated in November 1969 with Apollo 12. Then a technical incident occurred during the Apollo 13 mission, forcing the astronauts to return to Earth without having touched the moon. The program continued with Apollo 14 which landed on the moon in February 1971, then Apollo 15 in July 1971, Apollo 16 in April 1972 and Apollo 17 in December 1972, still without major incidents. The program was then abruptly and definitively stopped, without any satisfactory official explanation.

So it appears that these six successful missions, plus one failure, left three Saturn V rockets unused. This is one of the many questions raised about this lunar exploration program.

In fact, one of these rockets was used in 1975 for the flight known as ASTP (Apollo-Soyuz Test Project), the first joint space mission between the Soviet Union and the United States, highly publicized at the time. On the same day (July 15, 1975), the Russians and the Americans launched the Soyuz spacecraft from the Baikonur site and the Apollo 18 capsule from Cape Kennedy (the latter using the Saturn V launcher). And on July 17, the two Earth-orbiting spacecraft came together, allowing for a symbolic handshake between a Russian cosmonaut and an American astronaut. The three American astronauts and the two Russian cosmonauts spent around 40 hours together to conduct joint and separate scientific experiments. Then they separated before returning to Earth. So there was no approach to the Moon.

This collaboration between the United States and the Soviet Union may come as a surprise when you consider the persistent rivalry or rather the confrontation between these two camps. And yet, their rapprochement took place gradually over a dozen years.

In September 1963, two months before he was assassinated, President John F. Kennedy came up with a proposal to Nikita S. Khrushchev, president of the Council of Ministers of the USSR, before the UN General Assembly, that their two countries team up to go to the moon instead of competing at the cost of billions of rubles and dollars. But the invitation was then declined.

Their relations changed in July 1969. Earlier that month, astronaut Frank Borman’s trip to Moscow marked a form of detente between the two countries. And a few days later, the Americans won their bet by sending two astronauts to the Moon (Neil Armstrong and Buzz Aldrin), on the Apollo 11 mission.

In October 1970, cosmonauts Nikolayev and Sevastianov went to the United States for an extended stay and visited a number of space facilities guided by Buzz Aldrin. Then in June 1971, another American astronaut, Thomas Stafford (future crew commander of the Apollo 18 capsule), attended the funerals of the three Soyuz 11 cosmonauts, who died on their return from their mission.

On May 24, 1972, the ratification of the plan to conduct an orbital rendezvous between an Apollo spacecraft and a Soyuz spacecraft was signed. This project therefore materialized with a symbolic handshake in space on July 17, 1975.

This collaboration of the two greatest powers of the time showed that despite the apparent hostilities in their political activities, they were able to associate for strictly scientific and peaceful activities, in the context of a gradual thaw in political relations. But it was mainly in the 1990s, after the dissolution of the USSR, that the Russians and Americans intensified their relations in the aerospace domain with the International Space Station (ISS).