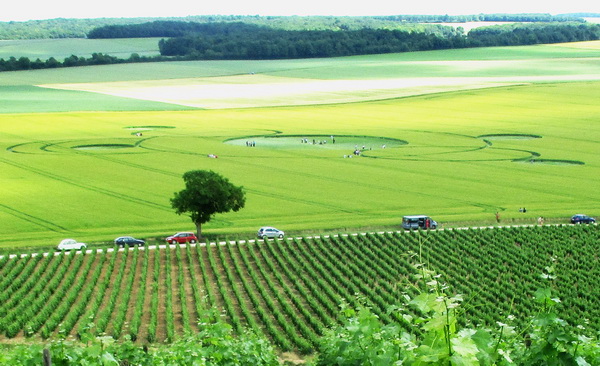 This crop circle appeared in the town of Crézancy in Sancerre (Cher). It consists of a very simple geometric pattern, like all the formations that have appeared in France so far. The question then arises whether this formation is authentic, i.e. of non-human origin, or it is the work of some prankster.

Several indications on the spot show that this formation cannot be of human origin. I was able to form my own opinion without having to travel, thanks to the photographs below taken by Laurence. Many thanks to her.

1- The way the barley stalks are bent to the ground in certain places.

These two photos were taken in two different places in the same glyph (thanks to Laurence).

2- The elbows formed at the upper node of the stems

In some areas inside of the crop circle, the barley stems are not completely bent to the ground, giving the impression that the work is not completed. The first photo below is an example of this.

If we look more closely (photo above), we see that in reality the lower parts of the stems are lying on the ground, but because of the formation of an elbow (each stem has 3 joints located at different heights which ensure their rigidity, the 3rd joint being the highest) they stick up from the 3rd growth node upward. This elbow appears on all the stems in this area of ​​the crop circle and forms an almost constant angle of about 30 °. In the photo below (by Nathanaëlle), several bent stems have been brought together in order to show off this effect.
It is not possible for humans to create an elbow on each stem, consequently this observation leads to ruling out the human origin of this glyph.

It should be noted, however, that this observation is only valid if it is made within a few days of the creation of the glyph. You should know that heliotropism (attraction to the sun) has the effect of gradually raising the stems lying on the ground, thus making a bend appear on the nodes of the stems. But this natural effect is progressive and takes time. But the above photos were taken only 3 days after the glyph was discovered, which excludes an significant effect of heliotropism.

Another strong argument: the non-human origin is further confirmed by the fact that this elbow on the stems exists only in certain areas of the crop circle, and not everywhere, as if the authors of the glyph had striven to give indications on the authenticity of the formation, clues comparable to a signature…

The testimony of another person who visited this crop circle and reported having felt very strong energy in certain areas, also confirms the non-human origin of this formation. Thanks to Carole.

Interpretation: Let me restate that our study demonstrates that the authors of this type of crop circles are nature beings, who are invisible to us because they live in another terrestrial dimension. They live in the elementary plane, which is intermediate between the etheric plane and the dense material plane, and therefore close to the latter. This is why they can manifest themselves in our material plane, precisely to call our attention and remind us of their existence.