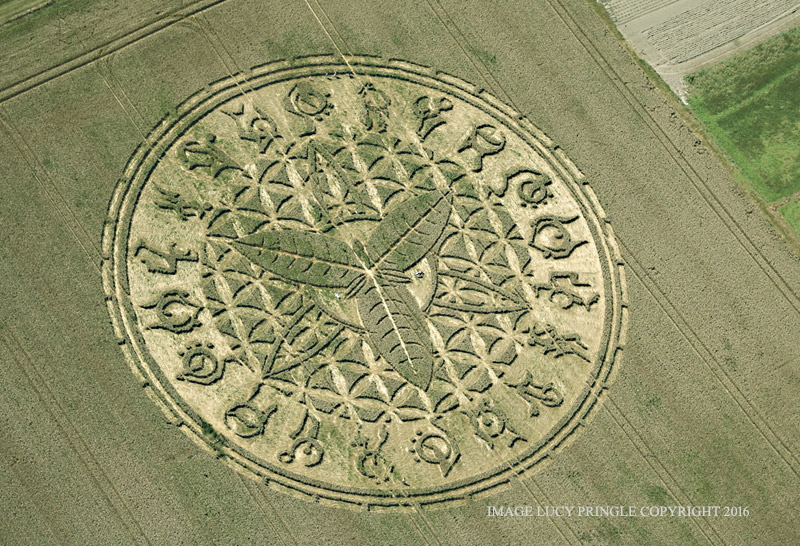 A lesson from the 2016 crop circle season is that it has become impossible to distinguish authentic (non-human) formations from those made by man, based only on aerial pictures. The circlemakers have refined their techniques and the formations of human origin can now be very elaborate.

The crop circle discovered on August 12, 2016 (photo above) in the small village of Ansty (Wiltshire) is an illustration thereof. It is a magnificent and large formation (110 m in diameter). Its complexity and the finesse of its motifs surprised all observers. At first sight you could never believe it was achieved by man. And yet, the reality is that it was made by man.

Something new appeared on the motifs on the edges of the circle: a series of new characters, which inevitably suggest an unknown alphabet. However, these pseudo-characters are very suspicious for several reasons:

She was able to see that all the signs represented (in duplicate) on the periphery of Ansty’s drawing and which correspond to the word MOTHERSHIP were found, identically, engraved on glass objects manufactured by the American company «Mothership Glass»and presented to the public in July 2016. The signs on the glyph corresponding to the four letters H are indeed similar.

Added to the great similarity between the Ansty design and this company’s logo, this observation reveals a close link between the crop circle and the American company. The probability that the glyph was made by man is therefore very high.

It just so happens that this crop circle was discovered on a farm that, in previous years, had made mazes in wheat fields every summer, for advertising purposes.

According to a field survey carried out by an English collaborator of Linda Moulton Howe, who interviewed residents of the village, the crop circle was carried out by a team of eight people, during the month of July until early August 2016. One resident said that, initially, eight people worked for three nights using headlamps, torches attached to poles and lasers. Then, in the next two weeks, they worked during the day, in teams of two or three.

Significant clue: In photos taken shortly after the formation was reported (August 12), weeds can be seen growing on the ground-lying wheat. This clue shows that the wheat had been bent for some time at the time the pictures were taken!
– It therefore appears that, in all likelihood, the formation of this crop circle was paid for by the company Mothership Glass, for advertising purposes. But few people are aware of these investigations, so this case has added even more confusion to this subject which is already very little and very poorly understood..
– It also appears that the means deployed by the «circlemakers» changed a lot in recent years. Their tools are no longer limited to simple boards or rollers to bend and flatten plants to the ground.

One might wonder if this insistence on casting doubt and generating confusion about crop circles, on the part of circlemakers, by drawing increasingly complex patterns, is not one of the reasons why the number of crop circles has significantly declined since 2013, compared to previous years, and that there has been no new major formations.

It is necessary to realize that, if the glyph of Ansty was achieved in about two weeks by a team of eight men, all the genuine glyphs are made in a few seconds (according to the many direct eyewitnesses). The “true” crop circles, which cannot be of human origin – for many reasons that have been extensively developed – do exist and that is the only thing we are interested in.