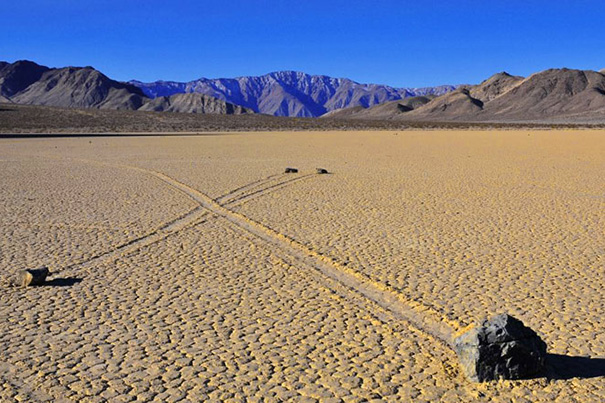 The pictures speak for themselves: You can see big stones that have moved on clay soil that is quasi horizontal but rough, leaving deep tracks behind them over a distance of up to several hundred yards.

This phenomenon remains mysterious, as no one has ever seen these rocks moving. Some force seems to be at work without researchers knowing exactly what it is. What is this force that makes these stones move without rolling and despite the friction due to the nature of the surface? (When it is dry, a clay soil is not a particularly slippery surface.)

Several theories have been put forth trying to scientifically explain these movements. They are all based on the natural force of wind, speculating that the surface was made slippery by a film of water after heavy rainfall. The deep tracks and the accumulation of mud on the edges do suggest such conditions that made the soil softer and more slippery. According to another hypothesis, a film of ice on the ground after heavy rains in cold weather could be the cause (ice has a very weak friction coefficient).

It is interesting to note that these hypotheses are based on mechanical considerations using the wind as the sole possible force. But this sort of explanation cannot account for the fact that stones close to one another move in different directions. It cannot explain abrupt changes in the direction of certain stones that can even go in the opposite direction (see photos on the Listen to The Earth site).

This type of explanation is definitely not satisfactory but no other explanation is available to-date. It is the only explanation possible within a scientific study since the force of wind is the only non-human force recognized by science in a desert-like environment like Death Valley. These explanations are due to ignorance of the existence of entities of the invisible world (the spiritual world) who can intervene in our material world.

The objective of this blog and the associated Internet site is to show that these entities from the invisible world manifest themselves in multiple ways in our material world as if to call our attention to and remind us of their existence. But in our modern times, Humans are blinded by their materialist vision of the world and have forgotten these parallel planes.

Regarding the moving stones, because of the inconsistency of the above-mentioned hypotheses, and because the origin of this phenomenon is obviously non-human, it is clear that the phenomenon comes from an invisible, parallel plane. This is obvious to those who know about the existence of intelligent entities who live in invisible worlds.

Now, we know that elementals, or nature spirits, have the capacity to manifest themselves either by creating objects (ref. stones at Col de Vence or UFOs etc.) or by manipulating existing objects (e.g. crop circles). They are intelligent beings. This sheds some light on the phenomenon from a scientific standpoint: tracks left behind, abrupt changes in direction, inconsistent movements of stones. All of this could very well be meant to get our attention…and perhaps find our reactions and our ignorance amusing. The moving stones are interdimensional manifestations, IDIMs.