Crop circles “with a signature” ! 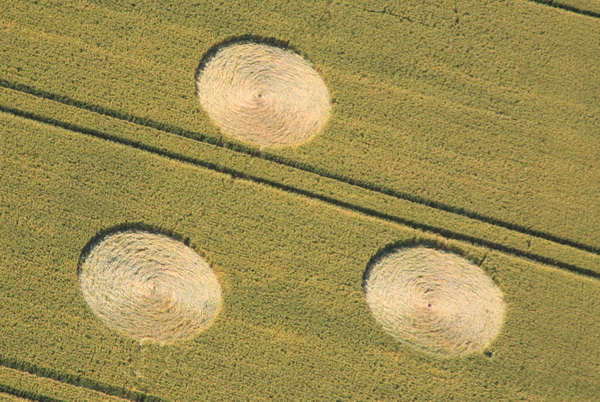 The oldest accounts (from 1946 through 1991) of people who witnessed a crop circle formation in progress (several dozens of them had this “privilege”) are very explicit as to its origin but they have been relatively disregarded because they are simply incomprehensible from modern science’s perspective.

Back then, formations were simply circular (as the term “crop circle” implies). These accounts mentioned “whirlwind”, “vortex ring states” in one or several columns of air in time and space, “strange wind” or “strong over-pressurization” that bent stalks to the ground and drew several circles within a few seconds and then vanished.

For example, this is a summary of one of the reports: The weather was pleasantly warm, the sky was cloudless without so much as a breath of wind. All of a sudden I heard a soft but clear hiss that came with a slight breeze that blew in the hedges around the field. And then my attention was drawn to a column of air 30 yards away, of approximately 10 feet in height. The column expanded to roughly 20 yards in diameter and the stalks on the inside were flattened to the ground in a whirling-type motion. The column then grew taller and stronger and whirled away upwards to eventually reach a height of 250 feet before whirling out of sight.

It seems, according to cases reported back then, that crop circles were created by whirls generated by columns of air. These whirls appeared out of the blue, creating circles in crops, although there wasn’t any wind at all prior to this happening. The whirls would disappear within a few seconds.

These air movements cannot be scientifically explained and yet they are real if we consider these (independent and consistent) accounts as reliable. Based upon what the circles look like, they are created by an intelligence. Who are these intelligent and invisible beings who manifest themselves this way?

The only possible answer to this question requires using ancient and esoteric knowledge about nature spirits: the elementals connected to the element of air. Those who the ancients called elves or sylphs are the only beings mastering air and aerial motions.

These accounts clearly show that nature spirits, more precisely air spirits, are responsible for the creation of crop circles, at least those that are clearly circular. We can even go so far as to say that these aerial whirls are the signatures of the creators of these circles.

This interpretation has been confirmed by a spiritual investigation and has been extended to all genuine crop circles.