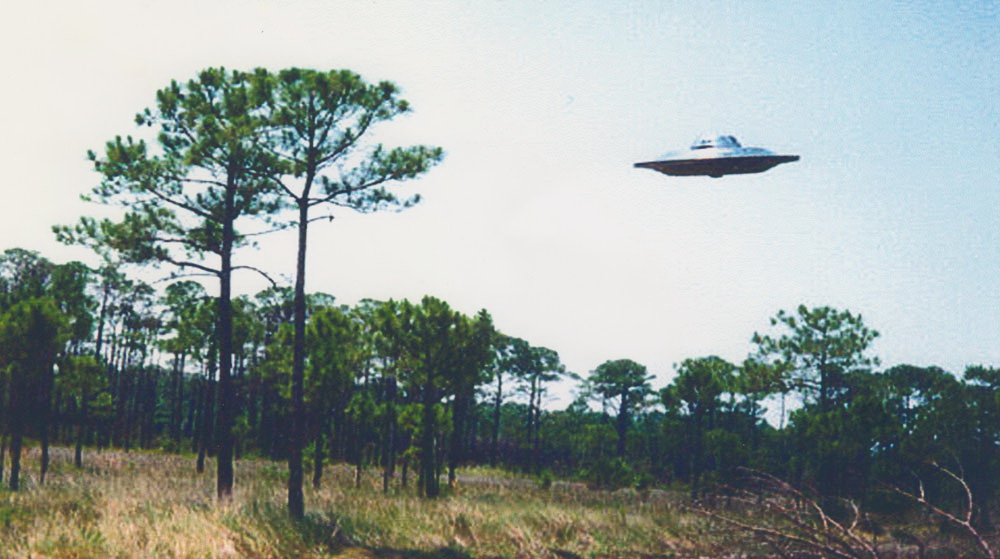 On the morning of 25 March, 1948, a flying saucer (as they were called at the time) was observed by several witnesses over the small town of Aztec, New Mexico (USA). At low altitude it was unsteady and seemed to be out of control. Soon after, it was found lying on a rocky plateau, 11 miles northeast of the town.

Facts as they have been reported

Local residents and workers from the nearby oil field came to look at it up close. The craft was close to 98 feet in diameter, and approximately 20 feet in height. In fact, it did not crash because it wasn’t damaged. It was resting on the ground but tilted as if one of its legs was missing or had not been extended. The craft was then broken into through one of the portholes and 16 bodies of small humanoid beings (looking like children) were found dead inside. The bodies were charred, as if they had been exposed to high heat, although the craft was practically intact.

In late morning after a few hours of great confusion when everyone was moving restlessly around the unknown object, armed forces turned up and cordoned off the area. Everyone present was unceremoniously rounded up and subjected to questioning. The soldiers forced every single witness to sign an oath of secrecy and told them that their lives would be in danger if they mentioned what they had seen. Access to the site was then denied, and a few days later the craft was transported to a secret base. A little later, in April 1948, the whole area was cleaned up and restored by a team of specialists, so as not to leave behind any visible traces of the event and make it look as if nothing had happened.

The UFO’s recovery was coordinated from Walker Air Force Base, which actually is Roswell Military Base, which had been renamed. We remember that the UFO crash event of July 1947 first resulted in a press release relayed worldwide, but the next day, massive disinformation supported by very powerful means covered the event again, backpedaling, trying to sell an initial mistake to the public. After such an experience, The military had acquired the necessary know-how to properly control all of the operations at Aztec, both in terms of on-the-spot logistics (equipment recovery) and relations with the public, in order to reduce the risk of possible leaks. Indeed, the Aztec UFO crash happened only 8 months after the Roswell crash so the existence of this “extraterrestrial contact” was little known, and virtually unknown outside of the city of Aztec itself. There never was any information released about the beings that made up the ship’s crew.

And to better prevent possible disclosure, soldiers were asked to “update” the personal records of anyone involved in the recovery. (Around 200 people). They made sure that, in their official records, none of these people were personally in that part of the country at the time of the incident. This way, if one of these people came to relate what they saw, the Air Force was in a position to provide “evidence” that it could not be true.

How reality was covered up

In fact, the truth about this Aztec event is based on research carried out by three investigators: Franck Scully in 1950, William Steiman in 1986, Scott Ramsey in 2015. Franck Scully’s 1950 book “Behind the flying saucers”, was the first book meant to alert the world to this extraordinary event, but its distribution was unfortunately quickly blocked by deliberate sabotage shortly after its publication, making the event look like a hoax.

How could this story be so quickly discredited? Two causes were apparently combined. The first comes from the jealousy of a journalist (J. P. Cahn) who thought he could buy the saucer story from F. Scully (in 1949, before the book was released) to make it a bestseller published in his name. Flying saucers made the front page of newspapers at the time. Because his negotiations failed, and F. Scully’s book was starting to have a national impact, he decided to destroy F. Scully and discredit the whole story of the flying saucer by ruining the reputation of two of Scully’s informants. He did that out of spite. He contacted the FBI to find a reason to sue them and take them to court.

The second cause appears to be a clever cover-up orchestrated by the US military and government, which acted quietly to ensure that these trials take place despite the weakness of the charges. Although these trials ended without the two men being sentenced or fined, a powerful slanderous press campaign against them resulted in the story of the Aztec’s flying saucer being turned into a miserable hoax. It was soon forgotten and the real story was censored for over 60 years.

In 1986, a second book “UFO Crash at Aztec” was written by William S. Bill Steinman. Unfortunately, the author chose to respect the anonymity of the witnesses and only disclosed their initials. This did not make it possible to check their revelations, and the book did not have the sought-after impact.

A new investigation started the case all over again, thanks to the persistence of Scott and Suzanne Ramsey. They followed every possible lead through to the end in order to solve the very complex puzzle of the event. Thanks to their perseverance, their thorough investigation led to identifying new witnesses, to relevant documents and to additional evidence. Their book is the result of a compilation of works gathered over a period of 29 years. It was released in 2015 in the US, under the title “The Aztec UFO incident”.

Franck Scully had written that his information had been communicated to him by a group of scientists whose identities he concealed throughout hid lifetime and who were referred to in the book under the same name: Dr Gee, who claimed he was one of the few scientists who had personally seen, examined, inspected and analyzed the craft recovered by the government. Scott and Suzanne Ramsey’s investigation established the link between F. Scully’s informants – all under the name of Cr Gee – and prominent scientific figures of the time.

It is now clearly established that a non-human vessel crashed in 1948 in Aztec, and that it was secretly recovered by the US military. It is also interesting to discover in this book the methods used by soldiers to hide the truth from the population.