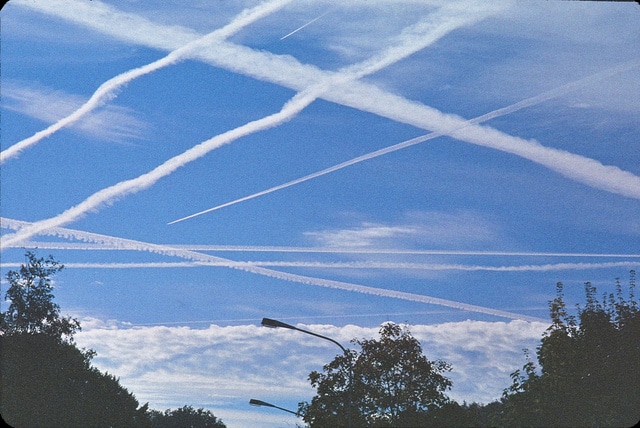 Chemtrails (contraction of chemical trails) began to appear in Western countries in the 1990s and are now very common. These wide white trails that persist for a long time in the wake of planes can easily be spotted. They are easily differentiated from contrails which are narrower, shorter and ephemeral. Regular trails are created naturally by a combustion process behind the jet, with the water vapor emitted immediately condensing due to negative temperatures at the altitude airplanes fly. Condensation trails are thin, sometimes even invisible, and disappear within a few seconds or a few tens of seconds at most, depending on the degree of humidity of the air. But chemtrails grow wider, deform and persist for a long time, for several hours. Those of us of a certain age remember that these long persistant trails did not exist prior to the 1990s.

The difference between these two types of trails is clearly illustrated in the above photograph: they are indeed two different phenomena. However, when questioned on the subject, official statements issued by airline companies and public authorities deny the reality of chemtrails. They say they are contrails.

Photographic evidence of the reality of chemtrails

1) But if all airplane trails are contrails, then why so-called airliners turn around, as shown in the photo above, which is far from exceptional? these observations have nothing to do with planes flying over airports awaiting clearance to land. a) because these contrails are observed far away from airports and b) because they fly at a much higher altitude than planes waiting for landing clearance do. These trajectories are proof that these planes are not airliners. The only rational explanation is that they deliberately spray products in the atmosphere above towns, for some still unknown reason.

2) Moreover, how can we explain that planes allow themselves to fly in all directions and form grids in the sky, when air regulations for civil planes impose to use air corridors and to fly in one given direction at a given altitude? (see example in top photo which, again, can be seen quite often).

In fact, the estimated altitude of these planes indicates that they (often) operate below civilian air corridors (between 6 500 ft and 26 000 ft), and therefore can’t be airliners. Moreover, the simple fact of counting the number of planes in flight at a given moment reveals that this number is completely disproportionate compared to the number of declared civil planes, as mentioned by the ACSEIPICA association (Citizen association for the follow-up, study and information on climate and atmospheric intervention programs). It is since 2002 that medium altitude air traffic (below 26 000 ft) has increased. The skies are disfigured by this new type of plane trails and new kinds of clouds, previously unknown, have appeared to eventually veil our (originally) blue sky.

3) And how else can we explain that a trail – supposedly a condensation trail – stops suddenly, and then resumes a few moments later and a little further momentarily, as in the photo above? This interruption cannot be explained by a sudden and local change in hygrometry (that is impossible), and cannot be explained either by an engine failure because the plane imperturbably continued its course. This is further evidence that this trail was produced by chemical spraying. One can imagine that this interruption took place when the tank was empty, and that an excess of pressure caused to eject the last residues.

The same observation can be made in the photo above indicating U-turns made by one or more planes. We see that one of the trails is interrupted, apparently definitely.

4) In addition to the analysis of these airplane trails, there are numerous observations of deposits on the ground of substances that have fallen from the sky, below these trails. One can imagine that these deposits form when chemicals have been sprayed in too great a concentration. Analyses have revealed the presence of a wide variety of products in these deposits, with a majority of metallic particles. The constituents most often cited are nanoparticles of aluminum oxide, barium salts, strontium.

Chemical spraying is the only rational explanation:

The only possible rational explanation for these trails is that they are created by aerial spraying. Chemicals are deliberately sprayed by planes through a process that creates white trails that look like contrails, but they are not contrails. The two essential questions which then arise are:

Can we answer these questions? To be continued.