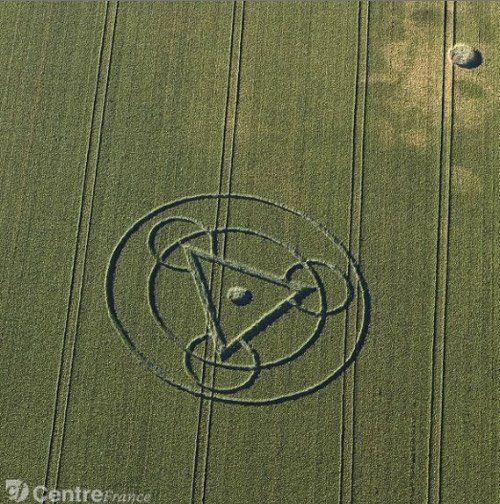 In May 2012, based on the work of hermeticist Enel and also on the geometric pattern below, Sandrine built a device to emit and receive shape waves, The apparatus is made up of:
– an equilateral triangle, inside a circle of 6.4 inches in diameter,
– an outer concentric circle of 10 inches in diameter,
– and two small circles placed between the two concentric circles, on the two vertices of the triangle.
Every day for two weeks, from 9 May 2012 to approximately 23 May, Sandrine trained and concentrated in order to first, receive and then send out positive thoughts of goodness and fairness, with application and perseverance. Sandrine sent her thoughts in an easterly direction, out of Chartres, France, her home town.

A few days later, in early June 2012, a crop circle was discovered in a wheat field in Checy, near Orléans, France. Sandrine was stunned when she realized that the motif of the crop circle was virtually the same as the one she had drawn to emit her shape waves: in both cases there was an equilateral triangle in an inner circle, and a concentric outer circle, diameters being in the same proportion in both cases.

However, there were two differences:
– the crop circle pattern was made up of three small circles instead of two,
– the small circles were placed at the vertices of the triangle and not between the two bigger circles.
But several observations support the idea that there is indeed a close connection between these two events.

Several coincidences exist between the emission of waves from Sandrine and the formation of this crop circle:

the fact that the crop circle is oriented in the direction of Chartres where the wave was emitted from.
These coincidences cannot be due to chance. There has obviously been a cause and effect relationship between the emission by Sandrine’s emitter, and the creation of the crop circle at Chécy near Orléans. This implies that the authors of the crop circle who, according to the interpretation developed in Daniel Harran’s study, are elementals. The latter perceived Sandrine’s emission, they perceived her thoughts linked to great universal values ​​of beauty, kindness and truth, and they wanted to respond to it… their own way. And through this response, not only do they manifest their presence in Checy, but they also reveal that they can perceive human beings actions.

Note: The elementals’ response was apparently sent toward Chartres, but, Sandrine’s emission was meant to be directed east, not Orleans. However, we know that the elementals live in a different space-time, and the notions of space do not necessarily have the same values.

Thank you to Sandrine Berger from Chartres for sharing her experience and this very enriching information. This experience shows that there can be a real interaction between elementals and humans. Humans who generally are not aware of it. Other cases where crop circles were drawn in response to a thought or an intention from humans have been observed in the past (1).