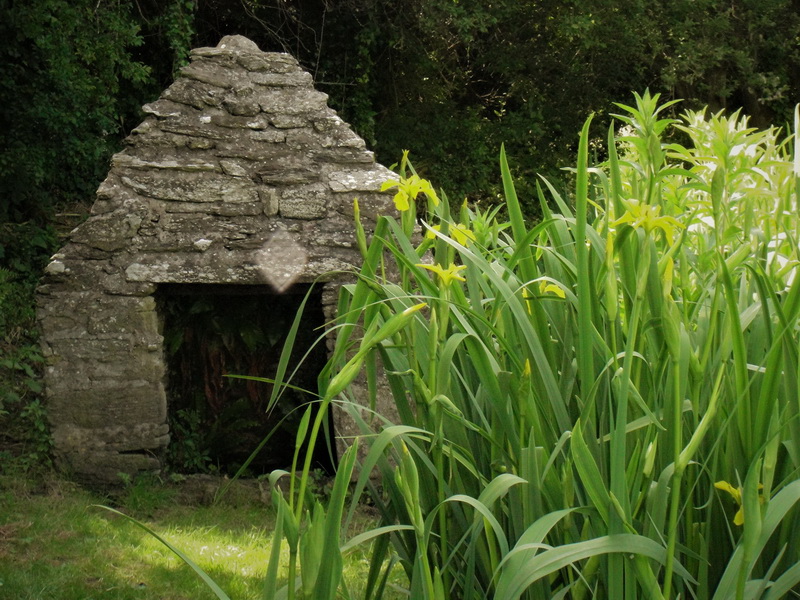 Photographs of orbs most often appear as white discs superimposed on the subject
photographed. Sometimes they are translucent or colored. But in some cases their shape may be different. It is the case with the orb shown in the photograph above. The stone construction is an old Breton fountain. The photography is of course guaranteed without retouching.

Some may see this as a pareidolia, that is to say an optical illusion, but the fact remains that the shape of the diamond, associated with the shape of the fountain, inevitably suggests an intelligent non-human origin, a manifestation of a facetious being. These characteristics are those of an elemental being (see the article “What is the Nature of Orbs” and the books by Daniel Harran). This orb is therefore an interdimensional manifestation (IDIM).

It is interesting to note that a book has been written on the “sociology of orbs”, in which the author, Sylvie Joubert, reported a large num ber of orbs in which sketches of faces can be seen (1).

The photograph below was taken without a flash, and yet it shows a large number of orbs. This is because a large source of light is coming from the upstairs doorway, which is facing the photographic lens. This backlighting arrangement allows light diffracted by particles in the air to reach the photographic lens with great intensity. But what is the nature of these particles that caused optical diffraction?

Thus, the very existence of these luminous phenomena and their very evocative forms are necessarily manifestations of an invisible intelligence, which is obviously facetious and has the capacity to create light. These three characteristics are those of elemental beings. These phenomena are here again interdimensional manifestations.

The photograph below, taken with a flash, is somewhat similar to the previous one. We can clearly see the trace left by the movement of an intense white light source – at the moment the picture was taken – which stopped right above the head of the young boy photographed (this shows the increased intensity of the bright spot). In this case, too, neither the boy nor the photographer were aware of the phenomenon until they discovered it in the photograph.

This luminous cord cannot be natural. It can only have a supernatural origin. Furthermore, the positioning of the light exactly above the boy’s head suggests some intelligence behind it. This phenomenon is necessarily the result of an interaction between an invisible intelligence and the people present, of which the latter were unaware. This intelligence has the capacity to create light to manifest this luminous cord synchronously with the picture snapping, and to move it at very high speed in a fraction of a second at the moment the picture was taken. Despite the intensity of this light, it is logical that it was not seen by the people present because they were blinded by the light from the flash. The only rational explanation for this phenomenon is that, here again, it is a manifestation of an elemental being. This type of luminous phenomenon is not very common but has been observed in various circumstances.