What is the nature of orbs 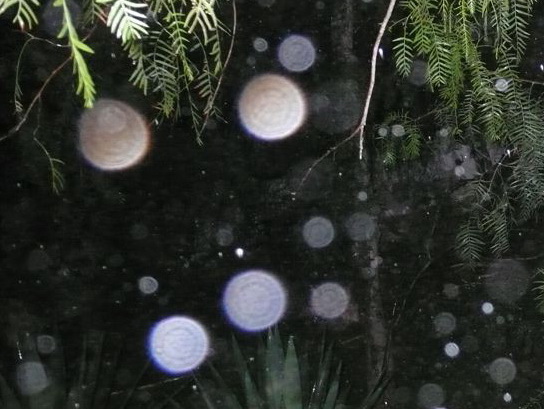 Orbs are those specks of light sometimes found in photographs, superimposed on images, even though they were not seen with the naked eye when the picture was taken. Their shape is most often circular, their color is white but sometimes colored. Some of the orbs (masculine word) are of great luminous intensity, while others are less bright, more or less translucent, and reveal an internal structure. Orbs are most often seen in photos taken with flash, but they can also exist in photos taken in natural light, most often in backlight.

The number of orbs has increased a lot over the past 20 years, but they were already seen with film cameras. They cannot be explained by flaws in the camera.

The scientific explanation of orbs

It is well accepted that orbs are caused by the phenomenon of optical diffraction which occurs when a light beam (emitted by the flash for example) hits fine particles of dust suspended in the air in front of the photographic lens . It is only in the case where the light is intercepted by very small objects (here dust particles) that the diffraction phenomenon will have a visible effect. The internal structuring mentioned above is typical of the diffraction phenomenon under very defocused conditions, when the camera is not being focused on the dust particles, which are generally very close to the camera.

Photographs taken in a dusty atmosphere indeed reveal a large number of orbs when the lighting conditions are suitable. This is the case with the photograph below, taken on a home improvement site.

This interpretation makes it possible to understand that the orbs cannot be seen with the naked eye, neither before nor after the shooting since they exist only at the moment the flash is activated because the phenomenon of optical diffraction is caused by the interaction of light on dust. Orbs cannot be seen at the time of shooting either because the eye is blinded by the intensity of the flash, reflected by the object photographed.

For scientists, orbs are therefore a purely optical phenomenon, and can be explained as the result of a physical interaction between light (from the flash) and matter (fine particles of dust in suspension in the air).

Three characteristics of orbs commonly observed, cannot be explained by this scientific theory.

Science doesn’t have the answer, but it does have the solution!

A simple and logical reasoning leads to consider the hypothesis where the phenomenon of optical diffraction would then be caused by the interaction of light, not on material particles but on energetic particles, which would be points in space where some energy would be condensed. Einstein’s theory of relativity (well-known equation E = m c²) indeed taught us that matter and energy are two equivalent forms, matter being only condensed energy.

These energy condensations could correspond to the presence of immaterial beings and therefore invisible but endowed with some energy. At this point, elemental beings come to mind. The study of crop circles, UFOs and IDIMs has indeed shown that these are immaterial (invisible) beings that are capable of manifesting themselves in many different ways and therefore possess energy.

The elementals exist in another plane or in another dimension. We can then say that these orbs are a form of interdimensional manifestation (an IDIM).

What this study proposes is that in all cases, orbs are created by optical diffraction under the effect of intense light (generally the flash) which meets microparticles present in front of the photographic lens. But these particles can be of two different types:

This interpretation is consistent with the characteristics of the orb phenomenon.