Mysterious circles in the sand and in the snow 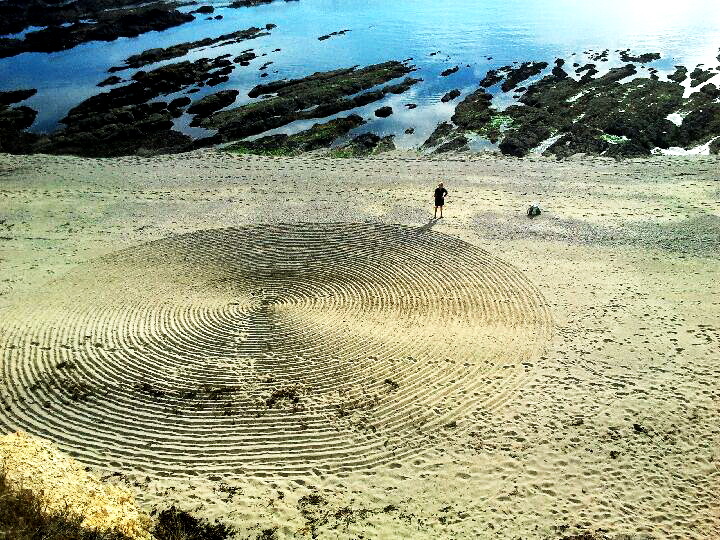 As the term implies, Crop circle patterns are drawn in crops and can only be observed in Spring or Summer, when the crops are growing. We know that crop circles have been observed on all types of plant surfaces, not only fields of wheat, rapeseed, corn, or flax etc., but also on uncultivated plant surfaces, for example grasslands, (much less common). These are known as simple circles).

This is rare and very little known but it happens that such mysterious circular formations are discovered on mineral surfaces, suc as the one in the above photograph. This picture was taken on a beach in Piriac-sur-Mer in Loire Atlantique, in Brittany, France (thank you Chantal). The pattern is made up of a set of concentric circles carved into the sand, with alternating thinner and wider circles. Using the human silhouette as a reference, we can evaluate the external diameter at approx. 100 feet. In no way could such a large and regular pattern be made by man and without leaving any traces at that. Only a footprint trace can be seen that crosses the formation but it was most likely made by a walker after the completion of the circles.

It looks like this circular pattern was made “using a giant compass” planted in the center, but no trace shows that such a material tool could have been brought in and then removed . It’s as if this perfect geometric shape had been produced by an “immaterial compass”, in other words by invisible forces. This observation also goes for crop circles that we find every year in grain fields. Remember that, until 1990, crop circles were all limited to circular figures. It is only since that date that they have gradually evolved into the complex forms that we observe today.

The characteristics being the same, we can suggest that the origin is similar, i.e. these circles in the sand were made by nature beings (elementals) in order to call man’s attention

Sand is not the only mineral surface that the invisible world uses to manifest itself and to call man’s attention. Similar formations have been observed on snow, as shown in the pictures below. We can see a set of “concentric” curves that are partially but not totally circular. Here too, some footprints cross the pattern, but this does not explain how these curves were made. Because no material and rational explanation can be proposed (there is no visible trace likely to explain the formation) a human origin can be reasonably ruled out. The origin is therefore mysterious. It is logical to think that, here again, nature beings manifested themselves in order to call man’s attention. The second picture suggests that the snow was deliberately melted so as to carve the parallel furrows.

Other circles in the snow

In the set of circles below, it is interesting to note that, there too, the circles were dug into the thickness of the snow, without it being displaced (indeed, no snow heaps can be seen around). The idea that comes to mind is that the force used to draw these circles caused the snow to melt, but a careful observation, (lower photo) shows that the snow did not melt. It looks like the snow was “removed” and not placed anywhere else, or more precisely it looks as if the snow was “dematerialized” so as to dig the circles. Now we know, from the analysis of UFO phenomena proposed by Daniel Harran, that nature beings indeed have the capacity to dematerialize matter (as they have the capacity to materialize and dematerialize objects). This observation is also meant not only to call our attention on the existence of nature beings, but also to remind us of their ability to master matter.