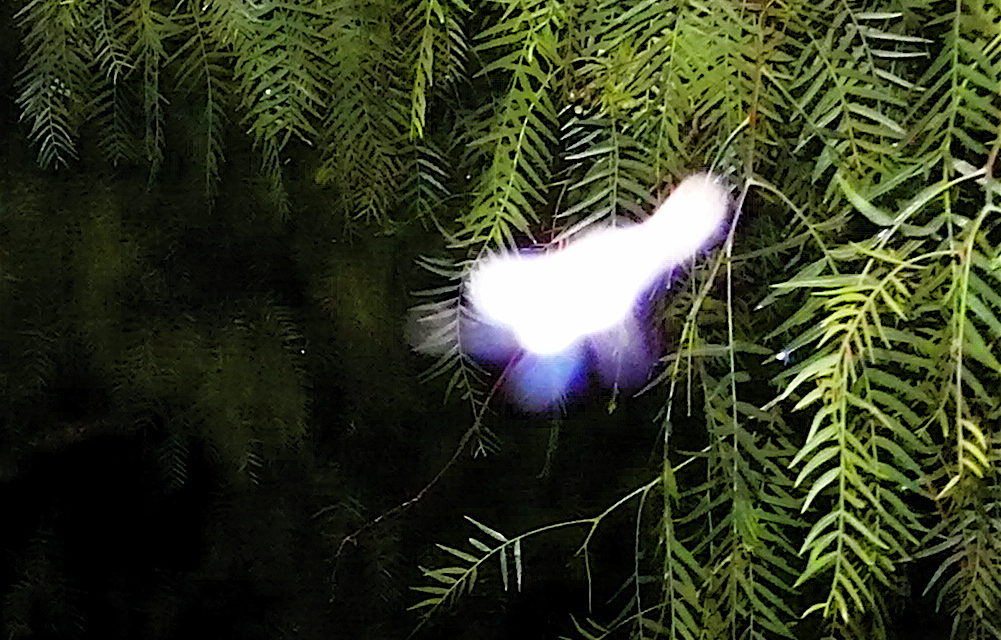 Orbs are light discs that can be seen in certain photographs, superimposed on the subject being photographed. They are often white, sometimes colored or they can show an internal structure. Several articles on this blog have been devoted to this phenomenon. The nature of orbs was discussed in the April 2018 article. In most common cases, they are created by the process of optical diffraction when light hits material particles in suspension in the air (if there is dust) or on “immaterial and energetic particles” (otherwise). In this case, we believe that these “energetic particles” reveal the presence of invisible entities, elemental beings in most cases (present in a parallel plane) when the event takes place in nature.

In this article, we will focus on observations of more or less complex forms of light found in photographs, some of which were taken with a flash, and others without a flash. They have various and evocative shapes as in the photo above or on the one below.

Let’s keep in mind that these figures appeared in the photos, although the photographer did not see anything. They evoke the movement of a small “unidentified flying object …” which makes one think of a butterfly species or rather … of a fairy because the form is not material.

Other observations have been assembled in the photo montage below. A surveillance camera sensitive to infrared radiation took a photo every four minutes (without flash). The montage brings together a number of photos where we can see light dots and various light shapes emitted by one or more entities that are not material objects.

What can be seen on the photo montage are sorts of “luminous cylinders” of various sizes, two of which seem static on the right and left of the image, and the massive forms that appeared temporarily. These moving luminous shapes, like those in the two previous photos, cannot be material objects. These are apparently immaterial objects that emitted infrared radiation (picked up by the camera for the photo montage) or reflected the light from the flash (for the first two photos).

But if you look closely at these shapes, you can see that they all appear to be an assemblage of identical, overlapping disks, some denser and others more subtle. This remark suggests that these luminous shapes could come from a white disc moving (just one) during the time of the shot. The white disk in question would therefore be an orb. This orb would reveal the presence of an elemental being. This orb (this elemental) had to be moving at high speed during the exposure.

In support of this interpretation, in the case of a night surveillance camera, the shutter release takes .6 seconds, which is a very long time compared to a classic camera (1 / 125th exposure). This length may explain why the orb may have time to move more during the shot and that gives the illusion of a massive object.

The same remark, and the same interpretation can be made on the luminous forms reported in the previous articles (May, August and November 2018).

In conclusion, it seems that these strange luminous shapes can be attributed to elementals that move during the time it takes for the shot. This gives the illusion of compact and massive forms or aerial and winged forms, depending on the camera shutter speeds.

We can confirm, thanks to the images of the photo montage, that these elementals emit energy in the form of infrared radiation, which makes it possible to detect their presence with suitable sensors. They are indeed energetic particles. Spiritual science teaches that they are present in a parallel plane called the elemental plane. It is an intermediate plane between the etheric plane and the material plane.